A Short Primer on Apostolic Ministry 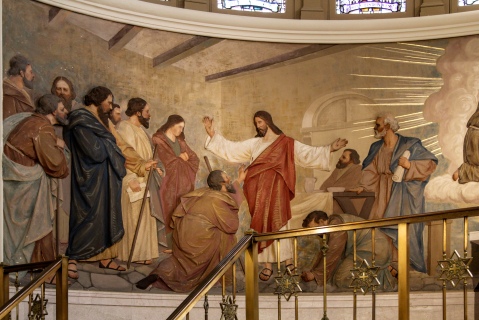 Over the last sixteen years or so, I’ve been on a journey to understand how Jesus builds His church.

If this feels like a strange pursuit, understand that I believe Jesus builds His church in a much different way than we think. Church As We Know It (CAWKI) is much different than Church As God Wants It (CAGWI). There is a difference between the church that exists and the church operating as God designed it. As I’ve pursued an understanding of how Jesus builds His Church it’s become incredibly clear that the gift of apostleship* is a crucial element in the process.

Very few know and understand what it looks like for an apostle to operate in the body of Christ. For us to recognize and accept apostles in the church, it’s important to know how that gift functions. I see many people struggling to embrace the gift that God gives first to His church because they don’t understand how it operates.

Alan Hirsch in his seminal work, “The Forgotten Ways” defines the apostolic ministry like this:

Why this ministry is so vitally important and seemingly irreplaceable is best answered by describing the apostle as the custodian of Apostolic Genius and of the gospel itself.  All subsequent apostolic ministry models itself on the archetypal ministry of the original, and authoritative, apostles. This is to say that he/she is the person who embeds mDNA**. And once the mDNA is embedded in local communities, apostolic ministry works to ensure that the resultant churches remain true to it and that they do not mutate into something other than what God intended them to be. As well as pioneering new churches, the apostolic ministry lays foundations in those that have none. The circuit riders of the American West were classic examples of this. They rode out to small towns and small population zones, preached the gospel, brought people to Christ, established churches, and then went on to the next town, only to return the following year on their circuit. The apostles of the Chinese church operated in precisely the same way.

Crucial to the founding and health of the church is this unique individual called the apostle. What drives them? What do they do? Why do they do it? We can see from the lives of the 12 apostles, Paul, and the other apostles mentioned in the New Testament an outline of what drove these believers:

They Were Restless Gospel Exporters- The very word apostle means “sent one” and implies travel. In Romans 15:20-24 Paul articulates a desire to plant where no one has heard the gospel. That apostolic impulse will take him first to Rome (to encourage the church) and then on to Spain. He never stayed in a place for long and always desired to be sharing the gospel and starting churches wherever the church wasn’t. You could say the apostle doesn’t see where the church is but where the church isn’t. Paul received this impulse from Jesus Himself (Mark 1:38). Jesus commanded his original apostles (and the whole church) to be focused on the Great Commission moving outward in the Earth (Acts 1:6-8, Matthew 28:18-20). Look for apostles to constantly be mobilizing the church to reach beyond its circle and touch people who are far from God. Don’t expect them to be tied to one place over long periods of time.

They Were Architects- In 1 Corinthians 3:9-11, Paul refers to himself as a master builder and one who laid a foundation for the house God was building. We see in this in the ministry of the apostle Paul or the original apostles whose teaching was the cornerstone of the church of Jerusalem (Acts 2:42). In many ways, this meant that apostles were the initial leader in an area, bringing people to the gospel and discipling them. Christ as the only foundation is a central theme in Paul’s letters and it is apostolic in nature to bring the church’s attention back to Christ alone.

This architectural function also extended beyond just the preaching of the gospel to helping the church find healthy rhythms of life that enabled the life of the church to function and flourish. As one apostolic leader shared, “the goal is to love as many people as well as possible.” This occurs through a strategic mixture of teaching and modeling.

They Were Spiritual Parents- Far from the CEO model of much of modern Christianity, the apostles were spiritual parents to those they led to Christ.  This wasn’t a statement of relational superiority, but a genuine description of how apostles related to the church. Hear the words of Paul: “For even if you had ten thousand others to teach you about Christ, you have only one spiritual father, (1 Corinthians 4:15)” and “Oh, my dear children! I feel as if I’m going through labor pains for you again, and they will continue until Christ is fully developed in your lives, (Galatians 4:19)” and “As apostles of Christ we certainly had a right to make some demands of you, but instead we were like children among you. Or we were like a mother feeding and caring for her own children.  We loved you so much that we shared with you not only God’s Good News but our own lives, too (1 Thessalonians 2:7-8).”

Apostles functioned in the love of parents for the new believers they discipled and formed into churches. This motivated apostles to care for the churches in a sacrificial way.  They were concerned with the church functioning as a family and organized the church as a family where all belong and are accepted, rather than a meeting where one person functions in their gifting.

These were the motivations that drove apostles to function and operate in a way that strengthened the entire church of the first century. Because apostles moved from place to place, preaching the Gospel, establishing churches, loving and raising to maturity individuals and the churches they started, the church in the New Testament grew at an exponential rate. When the church welcomes and accepts the role of apostle within the body again, we will see a return to this kind of exponential growth.

Obviously not everyone is an apostle or should try to function like one. But for the body of Christ to reach maturity, the gift of apostleship is important. When we welcome the service of apostles, along with prophets, evangelists, shepherds and teachers, we will see the body begin to “come to such unity in our faith and knowledge of God’s Son that we will be mature in the Lord, measuring up to the full and complete standard of Christ, (Ephesians 4:11-13).” I would invite you to ask God how you can learn from and relate to all of these giftings so that you and your church can grow up into the mature stature Christ has called us to.

*Whenever I speak of apostles or prophets, people are often concerned I’m speaking of people with the authority add to the cannon of Scripture. My view of apostles and prophets does not include any role of adding to Scripture.

**Hirsch uses the phrase mDNA to describe missional DNA. According to Hirsch, “what DNA does for biological systems, mDNA does for ecclesial [church] ones. DNA in biological life is found in all living cells, codes genetic information for the transmission of inherited traits beyond that of the initiating organism, is self replicating, and carries vital information for healthy reproduction, (The Forgotten Ways, page 283).”

5 responses to “A Short Primer on Apostolic Ministry”