The Starfish and the Spider: Centralized or Decentralized

[Editor’s Note: If you’re just joining us, we are in the middle of reading through “The Starfish and the Spider” by Ori Brafman and Rod Beckstrom. Each Monday and Thursday I’ll summarize a few important principles from a chapter in the book. Each Tuesday and Friday, I’ll apply those principles to the starfish-shaped church I believe the Lord is building in the Earth.]

First, let me acknowledge that today is not Tuesday. Sorry folks, work and time with Jesus were priorities. Now, on to the breakdown of Monday’s chapter…

Chapter Two was really about the fact that we’re studying two different creatures: Spiders and Starfish. We mostly live in a world of spiders and because of that we find it difficult to spot starfish when we see them.  They are so far out of what we consider normal that we miss them frequently. So the authors gave us a handy set of questions that show us the differences between decentralized organizations (starfish) and centralized organizations (spiders).

Within the chapter, the authors gave us a chart that showed the answers to these questions for two different organizations: One was a Spanish army, the other were the Apaches.  As you might guess, the Spanish army functioned like a spider (it was highly centralized) and the Apaches functioned like starfish (they operated in a decentralized manner).  It’s important to note that even these two groups weren’t pure starfish or pure spider, but they were certainly more of one than the other.

So, since today is the day where we look at how we apply these principles to the church, I thought I would take two different churches and place them in the matrix the authors designed. The first church I built a profile for is the first century church (or what we can observe of the first century church from Scripture).  The second church I built was the modern institutional church. I’ll say this ahead of time: I was trying to be generous with both groups and not bring my bias into the equation. You will most likely disagree with me, but realize that I was trying not to over-generalize.

First up is the First Century Church: 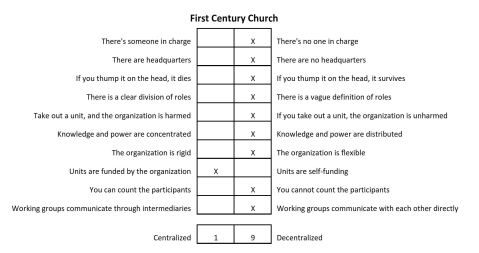 The first century church was very clearly a decentralized structure. There certainly was apostolic leadership, but it was only centralized for a very short period of time in Jerusalem and then through persecution and mission, it became difficult to find all of its leaders in the same city, much less the same room. Even then, there was no hierarchy or one individual who lead the church. There was no centralized headquarters for the early church. People often cite Jerusalem, Antioch, and Rome as the headquarters of the church, but the fact that it shifted throughout the span of the book of Acts tells us that there was no headquarters in the way we think of it today.

You could thump the early church on whatever you thought was the head, but the church wouldn’t die. Eleven of the twelve original apostles plus Paul were all killed for being witnesses, but the church only grew in their absence. You can try and argue there were clear roles, but Paul says he’s an apostle, a teacher, and evangelist/preacher (1 Timothy 2:7). Peter claims to be an apostle and an elder. Timothy, who is actually an apostolic worker was told by Paul to do the work of an evangelist. The roles certainly weren’t always clear.

Certainly you could take out a unit of the early church and the early church would still survive. The church in Jerusalem, for example, was devastated by the persecution that arose after Stephen’s stoning. The almost extinction of the church in Jerusalem (Acts 8:1) didn’t spell the end of the church. In fact, it marked the beginning of a great transition.  Knowledge and power weren’t consolidated into the hands of the many. The New Testament is filled admonitions that we have the Spirit who will teach us (1 John 2:27) and that we all can be a part of the ministry of the Holy Spirit (1 Corinthians 14:26).

Obviously the organization is flexible. What Jesus started in Act 1 has grown so much by the time we reach Acts 6 that there is the need to raise up other servants. The persecution that begins with Stephen forces not just location changes but also the beginning of ethnic diversity.  Obviously Luke struggles throughout the book to keep up with the numbers. At a certain point after the growth of the Jerusalem church, he just stops trying and starts using phrases such as “multiplied” or “many people were added to the church.” And we obviously see the various parts of the church directly corresponding to each other and not having to go through some kind of official channel.

The one area where I see the church acting somewhat more like a centralized organization within the New Testament is in the area of finances. There seemed in Jerusalem to be a common place to give (the apostles’ feet).  Even later in Paul’s letters, you see him collecting money from the Corinthians and Philippians for missions work in other areas. This isn’t good or bad, it just is. There is rarely a pure starfish or pure spider and we see that playing out in front of us.

I’ll be brief here, because I think most of us are more familiar with this expression of the body than the prior example. I think there are times where the modern church has had it’s head thumped (a prominent leader dies or falls into sin, for example) and the people are invested enough in the church for it to survive.  I think there are times where modern churches lose an arm or two and they survive.  Very few churches control communication between members and between other churches.

As you can tell, though, there are large parts of the church that have become much more centralized.  There is a clear human leader (usually called a pastor), a clear headquarters, ultra-clear roles, a high concentration of knowledge and power (seminary, ordination, etc.), rigid organization, a funding of the units by the organization (think cell groups or life groups, for example), and it’s very easy to count participants (they’re called members).

Many will argue that our times require us to be more centralized. I would disagree. I believe our times and the times we are about to move into require us to be more decentralized. It was this decentralized nature that allowed the early church to thrive even under the persecution of the Roman Empire. It’s the decentralized nature of the church in China that has allowed it to thrive as the Communists try to destroy it.  Our centralization makes us a bigger, easier target. Our decentralization makes us leaner, harder to kill, and easier to spread.

I believe the church that Jesus founded was designed to spread and multiply and because of that we need to become more decentralized. We need to be more like a starfish and less like a spider…

Other Entries in this Series Include:

The Starfish and the Spider: Introduction

The Starfish and the Spider: Introduction II

The Starfish and the Spider: On Napster and Apache Leadership

The Starfish and the Spider: P2P Networks and Spiritual Nant’ans

The Starfish and the Spider: The Spider, the Starfish, and the President of the Internet

3 responses to “The Starfish and the Spider: Centralized or Decentralized”