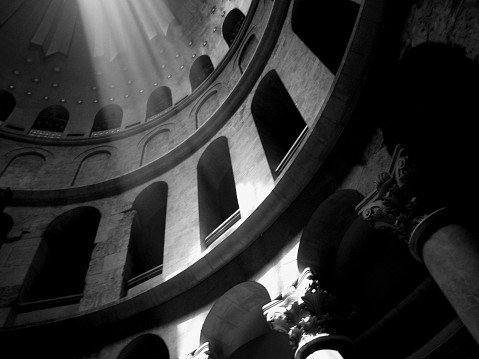 Today is Easter, the day all over the world Christians of all stripes and varieties celebrate the resurrection of Jesus. What I love about this holiday is that it, more than any other holiday that Christians celebrate, is one that pushes Christians to actually reflect on the most crucial elements of our faith.

One of the truths I’ve been mulling over the last few weeks has been the reality of the Father’s role in the death and resurrection of Jesus. For most of us, we’ve come to believe the lie that the Father is some sort of disapproving, hard to appease deity that spent this period of time waiting for Jesus to die, waiting to be appeased with humanity by the death of His Son*. The picture is more of an evil, distant Father than we care to admit. We believe because of a mixture of influences: Some good theology, some bad experiences with father figures, and a little bit of biblical ignorance. Lately I’ve been seeing the Father’s role in a completely different light.

At the moment Jesus died, Matthew records a unique detail:

At that moment the curtain in the sanctuary of the Temple was torn in two, from top to bottom.

This tearing of the veil wasn’t just a result of a terrible earthquake or the result of  stress on the Temple. This tearing of the veil was symbolic. The veil itself represented the idea that God and man were to be forever separate because man had sinned. To look at God in our sin would kill us. The veil in the Temple protected us from staring straight at God and dying, but it also separated us from God. It meant we had limited access to God. When Jesus breathed His last, the veil was torn to symbolize that the separation between God and man had ended.

But who tore the veil?

I can’t point you to a verse that conclusively says who tore the veil, but here’s what I believe: the Father Himself tore the veil. I believe that from Eternity He sat waiting to restore communion with mankind. He had longed to fellowship with man just like He had in the garden. So the very moment that Jesus breathed His final breath, the very moment the price was paid to cleanse us from our sin, that very moment, God the Father Himself tore down the veil that seperated us from Himself.

It was almost as if the Father was saying, “FINALLY!”

God had been wanting a relationship with His family this whole time. He wasn’t the neglectful Father turning His back on His Son. He along with Jesus had hatched a plan from the foundation of the world to draw us back into fellowship with Himself. The cross was the culmination of their planning and at the very first opportunity, the Father ripped down everything that separated us from Himself.

Today is Easter and the resurrection of Jesus is real and an enormously big deal. But I want to ask you a question: Is God your Father who wants a relationship with you so much that He tears down everything that separates us from Him or is He someone else to you? The answer may just shock you, but if we can believe rightly that the Father is seeking to tear down everything that separates us from Him, then we begin to see Him as He really is.

And then we are changed.

But whenever someone turns to the Lord, the veil is taken away. For the Lord is the Spirit, and wherever the Spirit of the Lord is, there is freedom.

*Note I do believe that Jesus’ death satisfied the wrath of God against sin.